Because of my history of panic attacks, I have a plethora of potential anxiety triggers.

Early on in my life, my panic attacks seemed to be connected to specific fears. As a very young child (under the age of 10) I had these intense panic attacks that were connected to a fear of being away from my mother. I was terrified something would happen to her. I would try to stay home from school daily by inventing various illnesses. I remember distinctly one morning trying to convince my mother I was sick.  I remember hysterically crying and becoming so upset that I actually threw up all over the floor. When that happened I yelled, “see I’m sick!” My mother, rightfully so, still made me go to school. That might seem awful to some, but I had been seeing a child councilor to try to help my mother and I work through my anxiety. She had recommended that I be sent to school unless I was definitively sick. I remember spending the majority of my school days, in that time period, just watching the clock and meticulously planning my mother’s day so that her errands etc. all took place within a mile or so of the school (which translated to safe for me). Eventually I came through that period of anxiety.

In the last few years of high school and first year of college I went through another acute time of panic. This time it was tied to religion. I had an intense fear of sin, fear of making wrong choices, fear of going to hell. Yeah, that was fun. Thank gawd (pun intended) the person I was dating (who later became my husband for many years) was incredibly understanding. He would help me narrow down what I was focusing on (for example, having sex before marriage), then he would help me go through the bible for scriptures that could help put my mind at ease (and he was not remotely religious – yet he was a saint to me.) It would ease my fears, the panic would ease off, and I would be ok until the next flare. I will forever be grateful to him for helping me through that time.

In my early 20s, my panic attacks were tied to religion (as I broke away from the hellfire and brimstone evangelical upbringing I had) or tied to an intense and irrational fear of losing my husband (to another woman, due to being a bad wife for whatever reason, general insecurities).

In my early 30s things began to shift. My panic was less focused on a “problem” and instead became focused on a physical sensation/trigger. I had a horrible span of time (2 years, maybe?) where I developed intense travel anxiety tied to GI distress. This was very problematic because at the time I was going on frequent motorcycle trips with a dear group of close friends. I *loved* these trips. But… I started having panic attacks before and during the travel portion of the trips. I can pin-point exactly 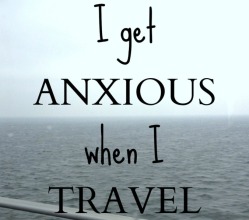 when it began. I was on a trip to see family (in a car) and I began having stomach trouble. I started having horrible abdominal cramps. The kind of cramps that double you over and make you fear your bowels will explode. Let me tell you that’s an awesome situation while on a highway in the middle of no-where with no gas stations or stores in sight. To make it worse, once we found a gas station and I went to the bathroom and I had relief. I felt better. Then, we got back on the road, and it hit again. And it hit again. Cramps, find a place to stop, get a little relief, start again, cramps… over and over. Panic joined the delightful mix. A cramp would hit, I would go cold, I would sweat, I would shake. My thoughts would tumble all over themselves – oh god, what if i have to ask him to pull over to the side of the road? When is the next exit? It spiraled and spun. I remember at one point demanding that he just leave me at a hotel (if we ever saw one) and he could just pick me up on his way home in a few days. This was before I ever had a prescription for Xanax. Let me tell you, I definitely could have used it. This situation added a whole new, awful, element to my panic. BODY TRIGGERS.

From this point on, my mind and body decided to work in tandem to undermine my sanity. If a thought or situation occurred which caused some anxiety, BOOM – my gut reacted by churning or cramping. Or, I ate something that didn’t agree with me? BOOM – my mind decides IT’S TIME TO PANIC. What the fuck, body? What the fuck, mind?

For a few years, instead of random external situations (or thoughts of those situations/fears) being the catalyst for panic, it became my gut. Fear of gut trouble and GI distress causing anxiety were the bane of my existence. It became so bad that the normal cues for a BM could cause a flash of anxiety. If that occurred during travel, it would cause a full panic attack. Let me tell you, this was a delightful period of my life. I wound up at my GP because all of this anxiety was causing more frequent GI distress – I was worried I might have IBS. I also saw a hypnotherapist for the first time, to try to train my brain out of associating panic with travel (because I LOVED IT). Eventually, I worked through this crazy association. However, to this day, it left a lingering imprint. If I have abdominal cramps anywhere other than at home, I get a flash of anxiety. Once in awhile (thank goodness, it’s a lot more rare), it will cause a panic attack. To this day, I carry a pharmacy of over the counter gut  meds with me at all times. I always have gas-x, chewable pepto, and chewable anti-diarrheal meds in my bag. They are a medicinal safety blanket. I very rarely use any of them (heck, some of them are probably expired – I should check that), but having them helps keep my mind at ease. 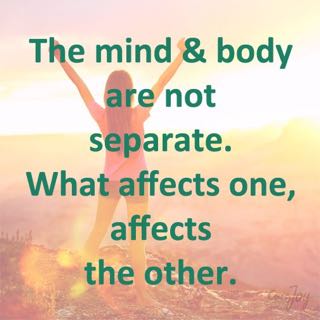 After the gut-triggers, I did a lot more work on my anxiety issues. I learned how anxiety is anxiety. It isn’t situations and the causes aren’t external (for me, everyone is different). Anxiety is my own personal beast. In my younger life, I tried so hard to figure out WHERE IS THIS COMING FROM??? WHAT IS CAUSING MY ANXIETY?? WHAT IS WRONG IN MY LIFE?? And, sure, there are situations which make me more prone to anxiety (like travel – which is still an issue for me), but the core of it is simply that I’m programmed for anxiety. Be that genetics, brain chemicals, a lifetime of associations… whatever. It is internal. It is part of who I am. So, when anxiety and/or panic hits, I no longer obsess on what external situation is causing it. Because ya know what, usually, there really isn’t one. It’s the mental glitch or it’s the physical sensation/trigger. So, instead my thought process is: BOOM, HELLO ANXIETY, what is going on internally? My belly is unhappy. It’s time to poop. My sinuses are stuffed up, so I feel short of breath and feel the need to deep breath, OH GOD, I DO THAT WHEN I’M ANXIOUS. Something made me nauseated. I’m so exhausted, I feel it in my bones. I just had a hot-flash (which really makes me dread menopause – I have a feeling it’s going to be hell retraining myself that hot flashes are hormonal not a sign of an impending panic attack). In other words, it’s a variety of normal body functions and normal random dysfunctions. These things don’t happen often, but when they do I recognize they can cause anxiety in me. It’s really damn annoying. Maybe it’s my unique weirdness, but it is what it is. But, recognizing that I have body triggers does help. If I have a flash of anxiety, I can do a check in with my body. Did I have some random body sensation that my brain identified as a panic symptom? Knowing is half the battle, or something like that.

Our mind and our body are connected, for better or worse. I have body triggers. I have mental triggers. It is what it is. But, at least I’m no longer automatically thinking: WHAT IS WRONG IN MY LIFE CAUSING ME TO PANIC?? Because to be honest, my life is pretty darn good. Sure, I’m too busy and there are times of stress. But, I’m happy. Anxiety and panic aren’t telling me my life is out of alignment. It’s just a element of my mental illness. I find that comforting.